An overview of our organization.

More than a nonprofit serving the homeless,OurCalling is a movement.

We are a team of volunteers motivated by the love of Christ to search in every corner of the city for the lost and needy and offer them true friendship and meaningful support. We build long-term relationships with friends on the street, guiding them to a relationship with Jesus Christ that will help them to realize their worth and inspire them to invest in their lives. We’re the boots on the ground.

OurCalling is on the frontline of the battle to cure homelessness. We’re on the streets every day meeting the unsheltered homeless of Dallas County, learning their stories, identifying their needs, and connecting their hearts to Christ. We have formed lasting connections with thousands of individuals who we are proud to be able to include among our friends. 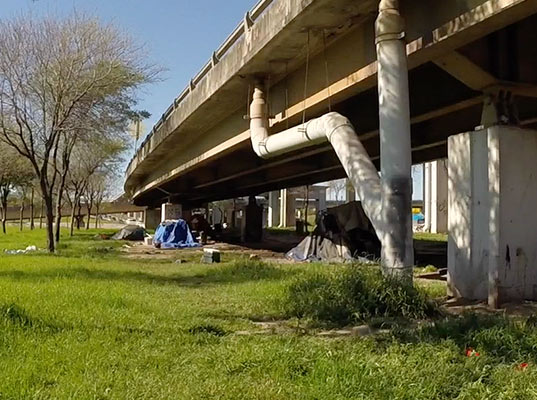 For even the Son of Man did not come to be served, but to serve, and to give his life as a ransom for many.

Our volunteers and partners include people from all walks of life. Many are motivated by their commitment to serve God and His children, others have simply chosen to be part of the solution. From one-time donors to our staff of ministers, what everyone involved in OurCalling understands is that homelessness is not a problem that can solve itself. It takes care, commitment, and investment to bring a life from the darkness of hopelessness into the light. OurCalling was founded by Wayne Walker, who continues to serve as its CEO and Pastor to the homeless.

During his youth, Wayne’s family actively pursued the scriptural commandment to “love your neighbor as yourself” by modeling the life of Jesus to scores of foster children whose own origins represented generations of human brokenness, dysfunction, sexual exploitation and abuse. Early exposure to these destructive forces set him on a path that would lead him to earn a Master’s Degree in Cross Cultural Ministry from Dallas Theological Seminary.

It was while completing his studies at the campus in downtown Dallas that Wayne was called to befriend and minister to men and women in the homeless community. During that time he began to establish personal, discipleship-oriented relationships with homeless individuals, many in the same urban setting where he and his family continue to work today.

What are you waiting for?